The Mike’s Bike Foundation’s mission is to get more people on bikes, as they believe in the power of the bicycle. The foundation depends on the donation of used bikes, passing them on to communities in Africa, where they will change a life for the better.

Mike’s Bikes believes that the most efficient mode of transport in the world is the bicycle. The bicycle is the most ecologically and fiscally sustainable vehicle ever created.  It provides freedom, mobility and positive change in the lives of people who need it most. Based on this belief, they have undertaken projects that are helping to put bicycles directly into the hands of people in developing Africa. They have shipped over 26 000 bikes to communities across Africa since 2008, and the changes these bikes make in their communities and in the lives of the owners is profound.

Mike’s Bike projects operate in at least eight countries including Botswana. In 2015 they came into partnership with Children in the Wilderness (CITW) when they donated 24 bicycles to us. CITW schools ran a competition, where children had to create an arts and craft project on the Okavango Delta. The winners received a bike, helmet and cycling kit. These bikes were a huge reward for children who demonstrated commitment to environmental conservation and their CITW Eco-Clubs.

Children in the Wilderness proudly received 30 more bicycles again from The Mike’s Bike Foundation in September 2018. This was exciting news to the CITW Botswana Team. A lesson we focus on in our Eco-Clubs is climate change, where we teach the children ways to combat this environmental issue. We talk about how we need to cut down our carbon emissions, and one way to do so is to ride a bicycle instead of drive in a car. As such, the donation of these bicycles speaks to our Eco-Club learning. We also saw this as an opportunity to run another relevant project, which would help us choose CITW children who could receive these bicycles as a prize. This competition took place across the eight schools with which we work. Eco-Club Members were to design a bicycle toy out of waste materials, and had to describe how it was done. They also had to discuss the importance of reusing waste. 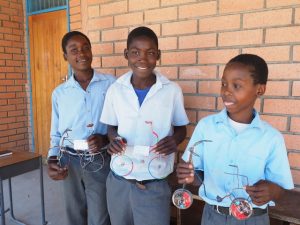 The reason behind this competition was to help our children to promote and understand conservation through ways of disposing waste, focusing on the 3Rs – reuse, reduce and recycle. The other reason for this competition idea was to make awareness of the environmental benefits of using bicycles in Botswana. The idea was to teach children that bicycles are the most efficient transportation machines people have developed so far. Children are encouraged to use bicycles as cars are the largest contributors of man -made greenhouse gas emission that contribute to climate change, but since bicycles don’t run on fuel they are environmentally sustainable alternative to cars.

The CITW team approached a talented and inspirational man, Mr Thato Molosi “Mista Tee” who is motivator, speaker, and weaver and has many achievements and projects involved in (locally and internationally). He is also one of the arts and craft judges/adjudicators known in Botswana. Mr Molosi was happy to help us to adjudicate the bicycle competition for the first six schools (Gudigwa, Beetsha, Gunotsoga, Seronga, Tubu and Habu Primary Schools). His commitment to the community, and willingness to work for the betterment of children in conservation inspired him to leave his office and travel with the CITW team to our schools on 7th to the 11th of October to assist us in choosing the best bicycles.

Mr Molosi not only focused on the adjudication of the bicycle competition, but he mentioned that since the Okavango community area is rich in natural heritage, and is a huge tourism attraction area, he reminded children and teachers of how lucky they are to live in such a beautiful area, and to have organisations like CITW and himself, who will travel so far to support them for better future. He also urged them take advantage of him and the CITW staff, because if we work together our children will have a brighter future.

Mista Tee ran his judgement of the bicycles made from waste, looking at creativity, originality, durability and craftsmanship of the product. In six schools, he managed to announce 16 winners who are waiting to receive their bicycles and we are left with two schools (Shashe and Sankoyo) to be judged. Mr Molosi will again be helping us to decide on the winners from these last two schools.

At the end, Mr Molosi encouraged children that many items found around their school/home can be used for different purpose, and so before they throw those items away, they should think about how they can be reused or recycled.

The CITW team would like to thank The Mike’s Bikes Foundation for the generous donation to Botswana. We believe the bicycles will help children to understand the benefits of cycling as we have been trying in schools to teach them about climate change. In addition, the idea will motivate them to work hard and perform well at school. Lastly we would like to thank Mr Thato Molosi for providing generous help in times of need. Volunteering will not make you a millionaire money-wise, but it will make you a billionaire blessing-wise. 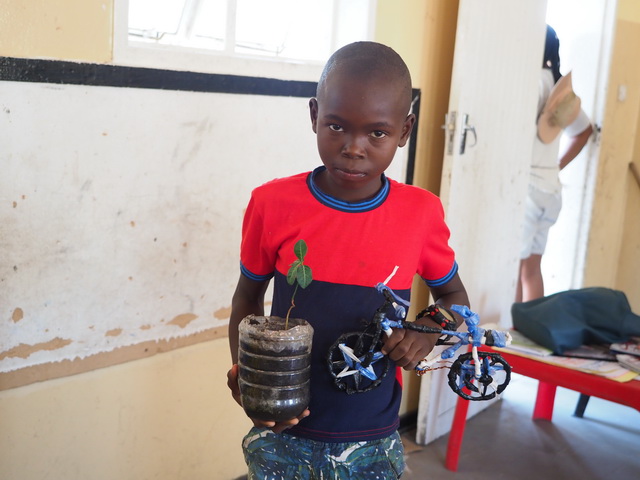 Boitumelo Moyo doing his presentation about his bicycle 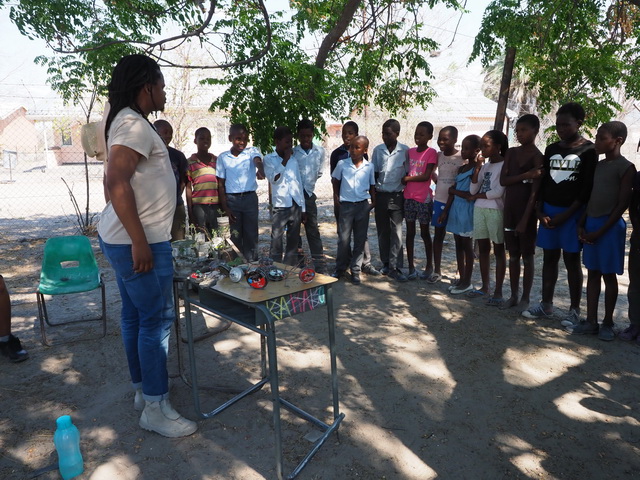 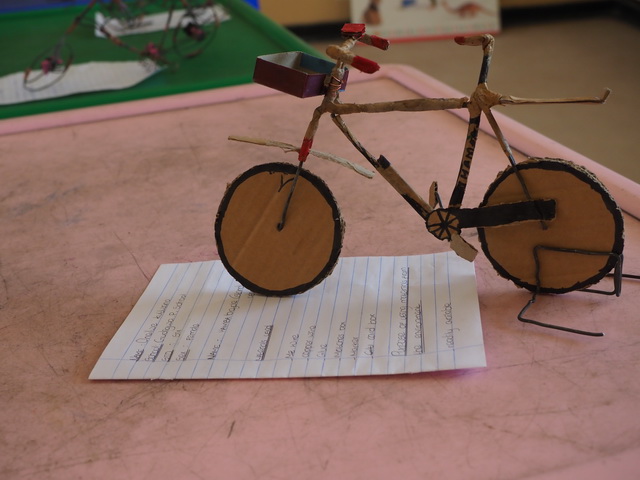 Creative use of waste materials to create a bike 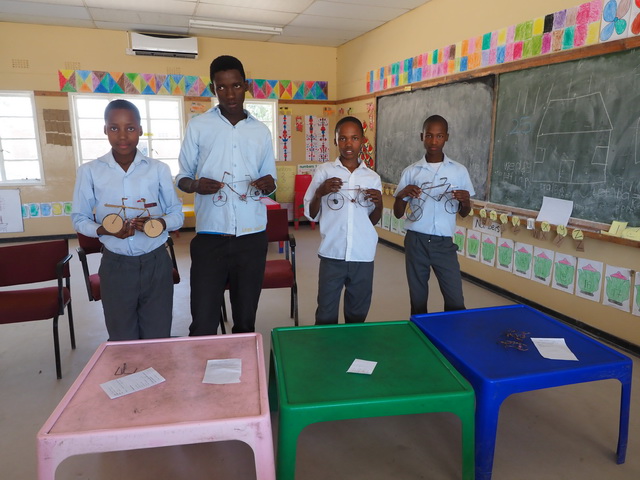 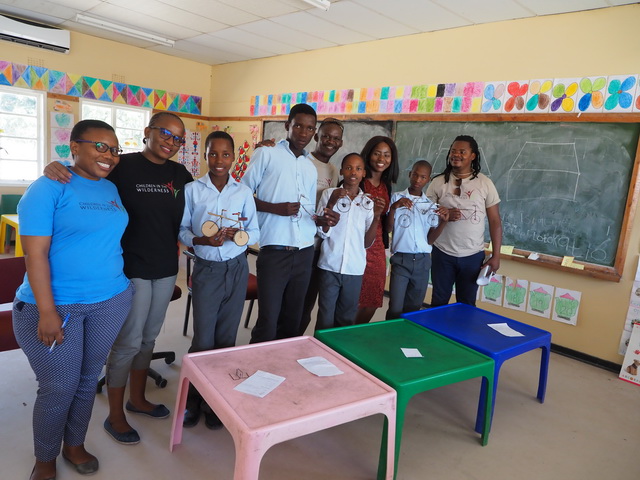 A few of the winners, MrTee and the CITW Team 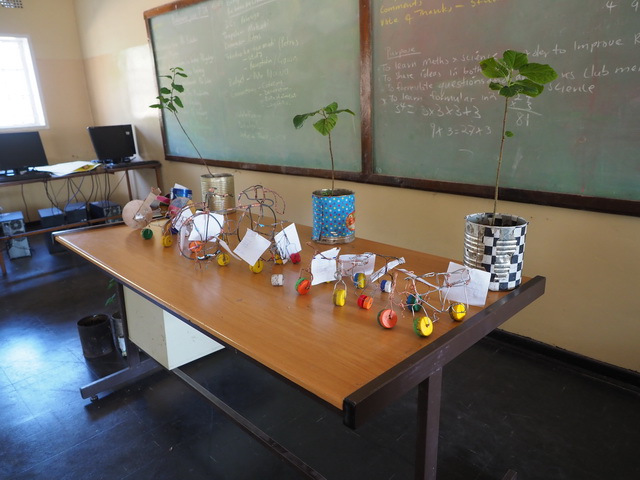 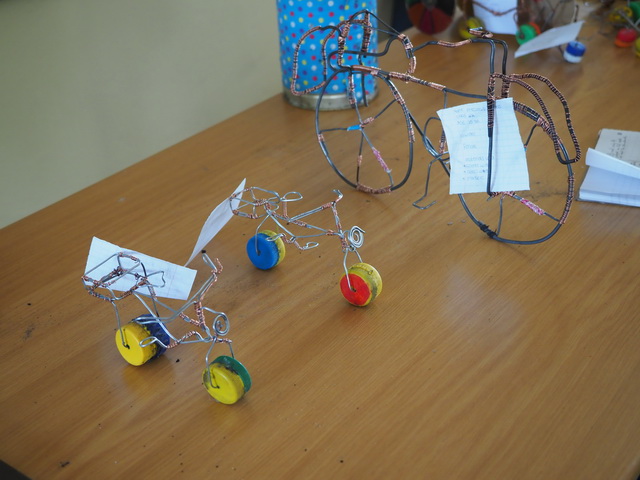 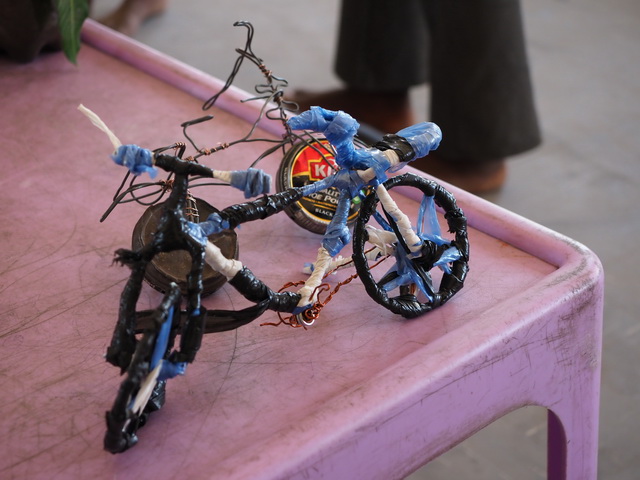 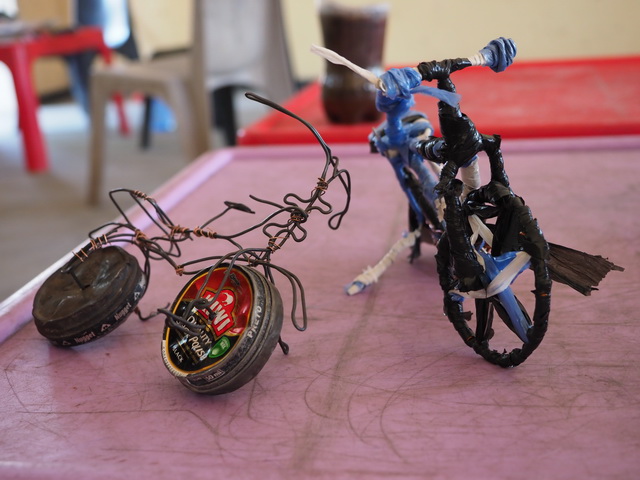 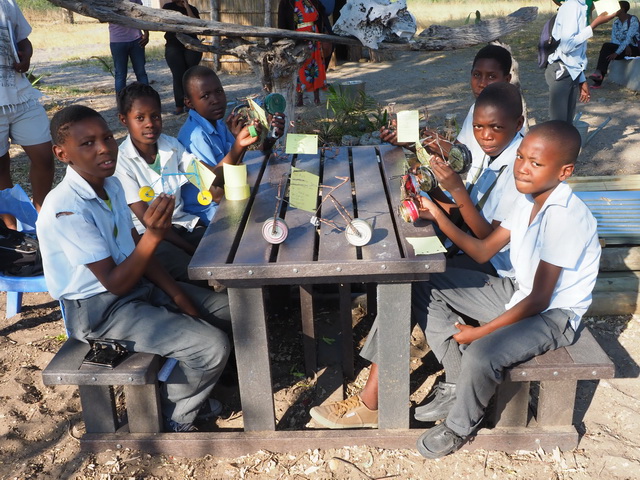 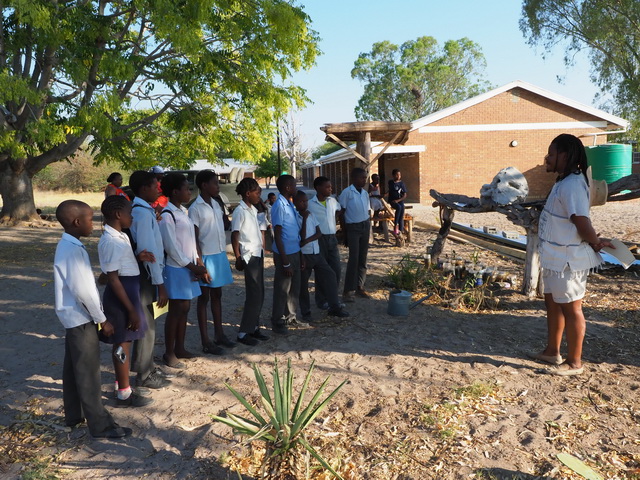 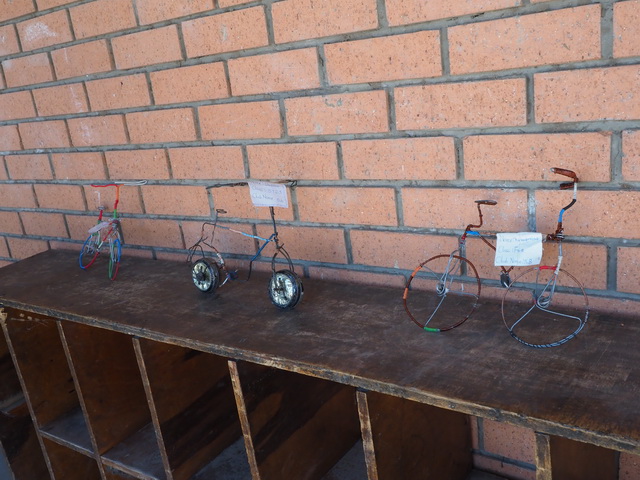 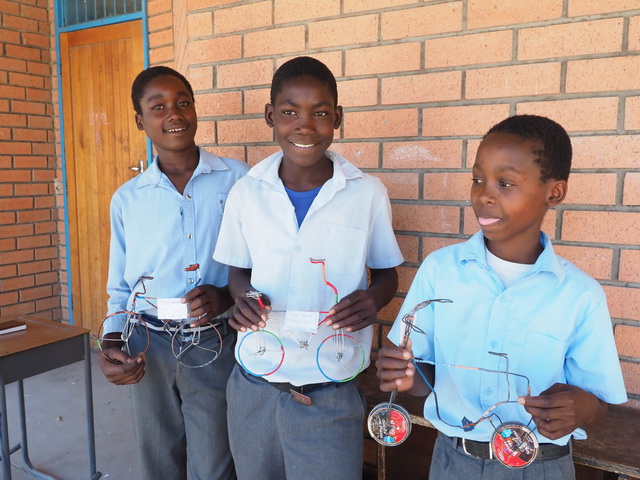 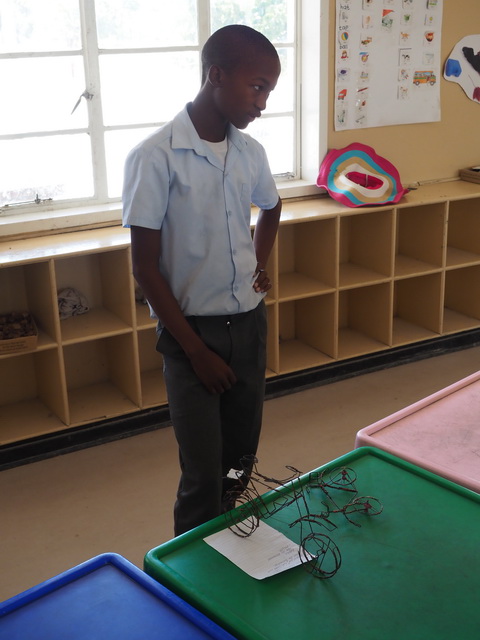 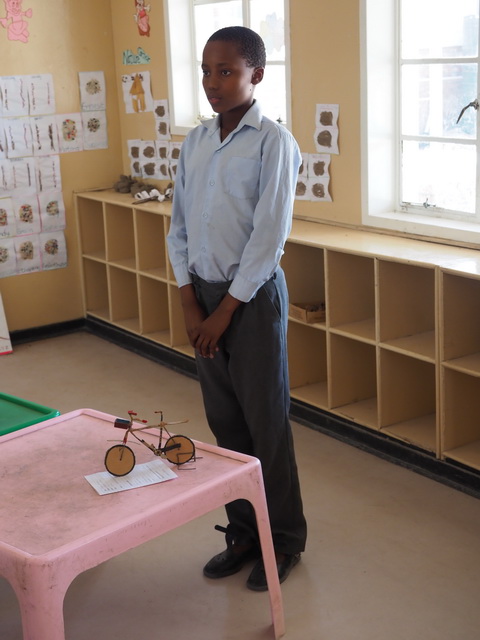 Creative use of waste materials to create a bike
0Shares
PrevNext 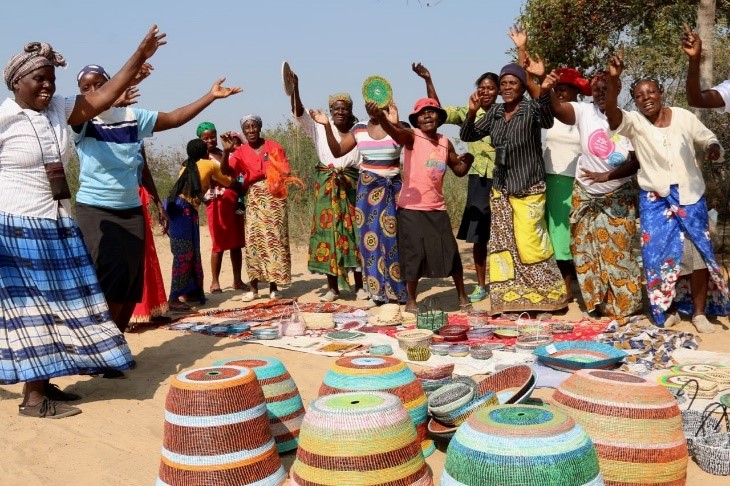 Sue GoatleyZimbabwe0
We are using cookies to give you the best experience. You can find out more about which cookies we are using or switch them off in privacy settings.
AcceptPrivacy Settings