Ever since Miroda Otto heard about the Nedbank Tour de Tuli five years ago, it’s been occupying her mind. This year she grabbed the opportunity she’ll never forget.

“I didn’t know what to expect until the day I actually left for Botswana where the race starts. All I knew was that one needed to make sure you have your passport, enough slime sealant in your tyres and also enough warm clothes for the cold morning starts.

Nedbank Tour de Tuli starts from the Limpopo airfield in the southern part of Botswana in the Mashatu Reserve. You cycle around the area for two days and then cross the border to Zimbabwe, with the ride ending in South Africa. Like most other multi-day events, it involves a bit of logistics to get to the start and back home from where the ride finishes. When you enter you can choose between the different transport options, from bus rides to direct flights. I opted for the direct flight from Durban. I met the group that I was travelling with at international departures where we had to clear customs first for a two hour flight to Limpopo Airfield in Botswana.

Upon arrival our group was informed that we will be the leading group. This involved staying ahead of all the other groups in order for them to follow our tracks. I was the only girl so I definitely felt the pressure, thinking to myself: “Surely all eyes will be on me now… will I be able to keep up? I better not mess this up.” The race briefing later that evening didn’t go well for me, as I arrived late after falling asleep in my tent. Now I really put the spotlight on myself, with fellow riders asking me about previous races I’ve done and where we placed in Epic. I wasn’t too sure if it was to try and find out if I’d be able to keep up with the group or out of general interest. I got even more worried about the pace of our group in the morning. It was quite fast indeed but I managed to stick with them, and my confidence picked up. By the time we got to the first water point I was a lot more relaxed. A few kilometres on, there was a really steep downhill section and most of the riders ahead of me walked down, so I decided it was my time to shine and I rode down it. That’s when I think my group realised that I am not too bad at riding a mountain bike.

Our group formed such a dynamic bond over the four days and everyone’s personality contributed to something special. Till indirectly became the bike mechanic, with his German precision at fixing just about 9o% of everyone’s bikes or tyres somewhere along the way, and our two Capetonian friends kept on wandering off during the ride or arriving just before the start, which for a change made me look like I was on time. As my usual riding partner, Annie, can tell you, I’m terrible at waking up in the morning, so I skipped breakfast every day to get up as late as I possibly could, and I was thankful for all the coffee Andrew brought me to get me going.

On the second day I spotted a hyena walking on top of the one ridge. The guys initially thought I must have seen something else, but because I was so adamant they said we could walk up the hill and go have a look. As we were walking I started doubting myself, and the thought crossed my mind that I have now sent 16 men on a wild goose chase up a mountain. It was quite a climb and I was just about ready to admit it must have probably been a dassie or something else, when the hyena suddenly came out further up the hill. I dont think that I will ever be so happy to see a hyena again in my life as I was at that moment.

The environment was spectacular. We traversed grasslands and Mopane tree “forests”, sped past beautiful rock formations and saw giant baobab trees. When crossing the border into and out of Zimbabwe we also went through the widest sandy river I had ever seen having to push our bikes through it probably contributed to it seeming an extra boom wider. As much as I’m not a morning person, it was great that our group started early because we got to see some of the most beautiful sunrises the bush has to offer. You could actually feel everyone’s admiration of nature as we looked at the beautiful pink colours on the horizon and stopped to take some photos.

Every day felt like we were on a long game drive through a Big 5 reserve, and the vulnerability of not being inside a game drive vehicle made you feel like you were almost part of nature. We saw a lot of game, especially giraffes, wildebeest, elephants, and of course, hyenas. On the first day we also had some excitement when we almost cycled into a bull elephant while coming around a corner. He was flapping his ears and sort of started coming towards us but we immediately backed off by cycling in the opposite direction, and he went back to eating. I never felt unsafe at any point, and whenever there was a chance of a possible encounter with any dangerous animals the guides would be notified and we would be diverted or wait for the animals to move off.

Having unmarked and “unprepped” routes had its advantages and disadvantages. I think some mountain bikers would have enjoyed having sections with more flowing single track to ride on instead of navigating their way through rocks and trees from one animal path to the next, while on the other hand it contributed to the sense of adventure by not knowing whether you had taken the right line or animal path, or what awaited you around the next turn. The GPS basically just indicated the direction in which the guide needed to go and he had to choose the path he wanted to take to get there.

Our team leader, Anton, is a Freedom Challenge finisher which gave all of us a false sense of security that he would definitely not get us off course. What we did however, not reckon with was that he was way too fit for some of us and he didn’t mind taking the odd 5km detour to quickly go look for some game at a “nearby” waterhole. It was also hilarious when he managed to get our group off course when his GPS batteries ran flat and we arrived at the first water point around the same time as group five. Our tittle detour was mild though, compared to one of the other groups who added an extra 15km to their ride on the second day.

The riding is not very technical when you compare it to similar races like the Swazi Frontier, where you also mainly ride on animal footpaths and find your way with a GPS. The total ascent over the three days is also really low and the distances were perfect, between 50 and 60km, which did not leave you feeling completely exhausted by the time you got to the finish. I would recommend that you at least have a bit of prior experience with riding in sand or over rocky surfaces to thoroughly enjoy the ride, but you can always get off and push your bike whenever you feel uncomfortable, and the sweeper at the back will make sure you do not get left behind. By making the race an untimed event without any prizes to be won there was no rush to get to the finish and we could thoroughly enjoy the scenery and amazing water points along the way.

I think this is the first mountain bike race where I managed to pick up weight from all the eating and drinking. At the first water point of the day we got delicious crunchies and coffee with condensed milk. They then gave us another light lunch approximately 20km from the finish, and when you got to the finish there was another full lunch waiting. The team rides as fast as the slowest rider and if anyone has a mechanical, the whole team stops and works together to fix it. I stopped counting the number of punctures that needed to be fixed over the four days, and I loved the fact that no one ever got annoyed or irritated because we all knew it could be one of us next. One of the great things they do on Tour de Tuli, that I have not come across in any other race I have done before, was that they had backup vehicles around, with spare bikes and bike parts, which enabled a few cyclists to still keep on riding where it would have meant the end of their ride in any other event. Three of the guys in our group had to at some stage either make use of a spare bike or a spare wheel to complete the day.

I now understand why Tour de Tull is such a popular event. It is especially great for companies to take their clients or for groups of friends to do something memorable together, while spending time in nature and contributing to a great cause through Children in the Wilderness. This was a really special time of connecting and bonding with the people in my group, and I’ve made so many new friends. When describing this incredible ride to people when I got home, the words I used repeatedly were “camaraderie”, “friendship” and “fun”. That pretty much gives you a good summary. It is one of those races you will remember forever.” 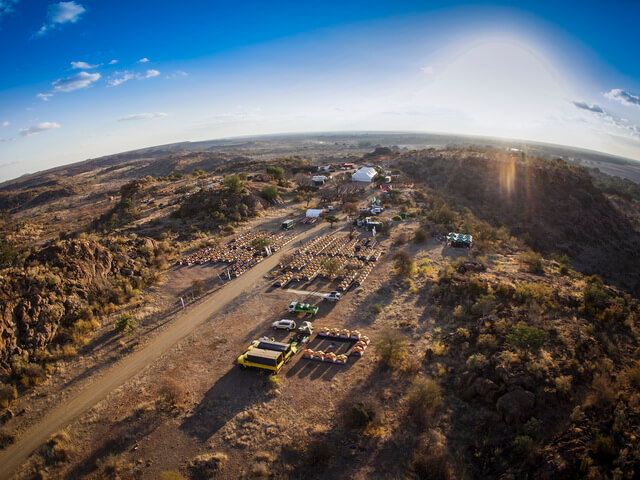 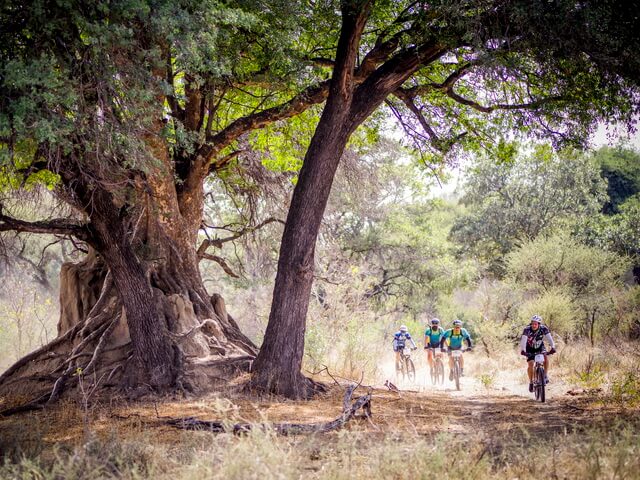 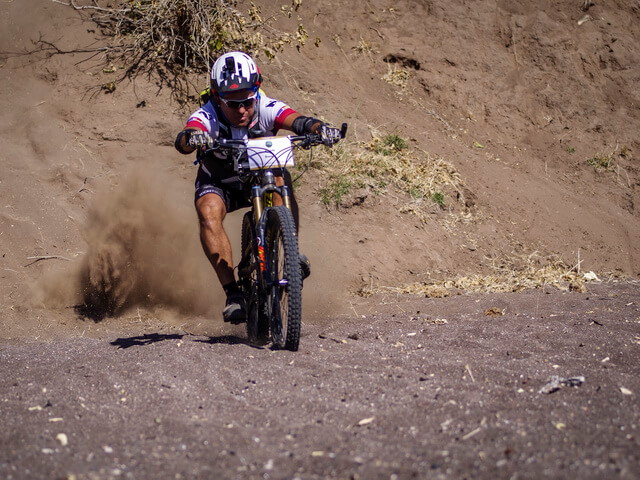 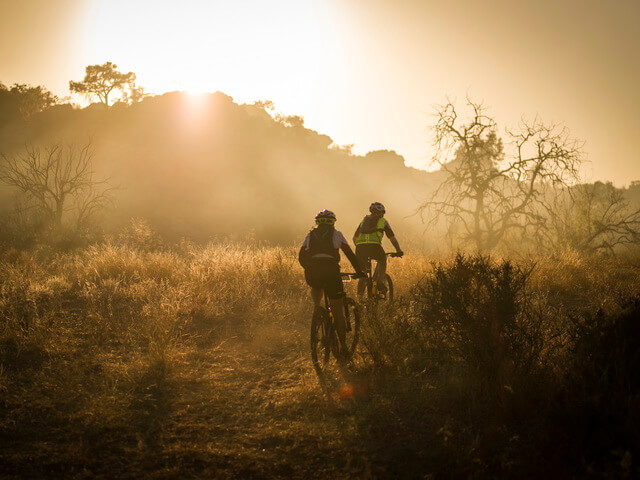 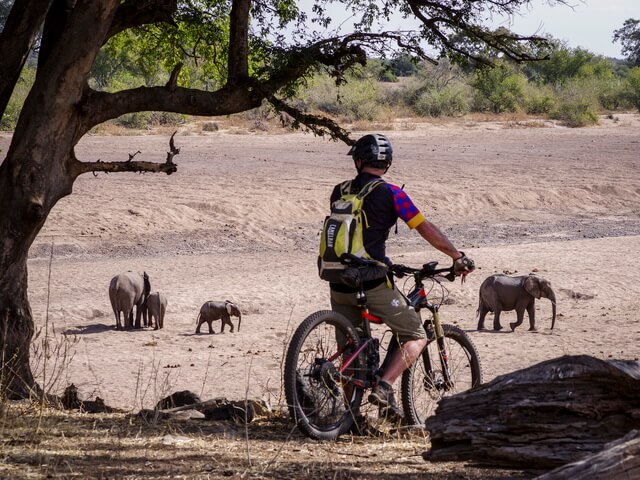 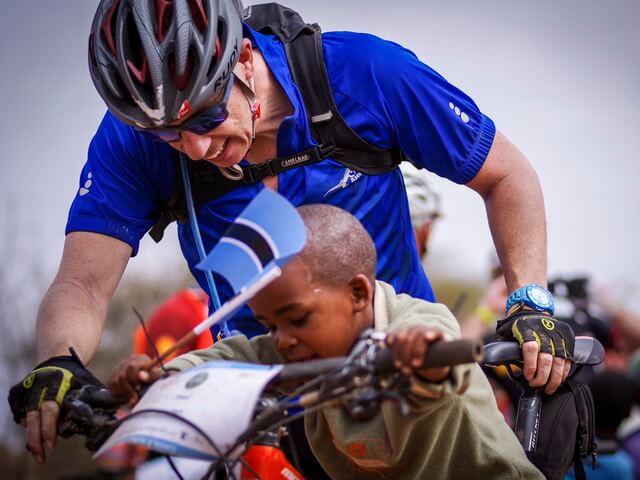 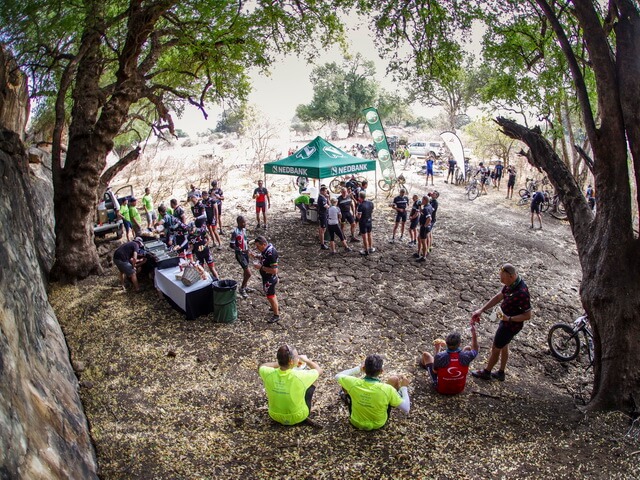 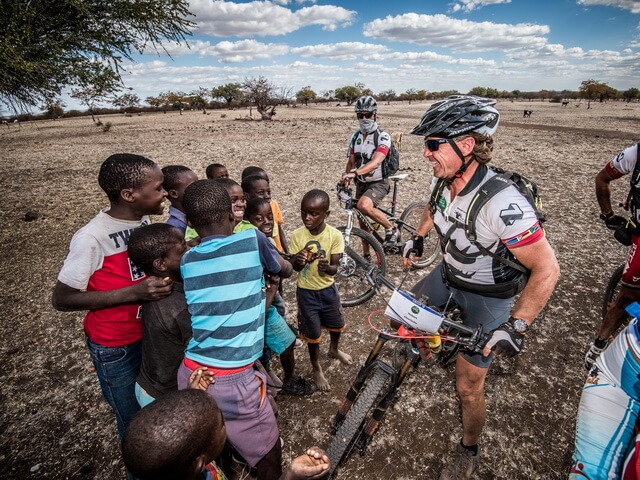 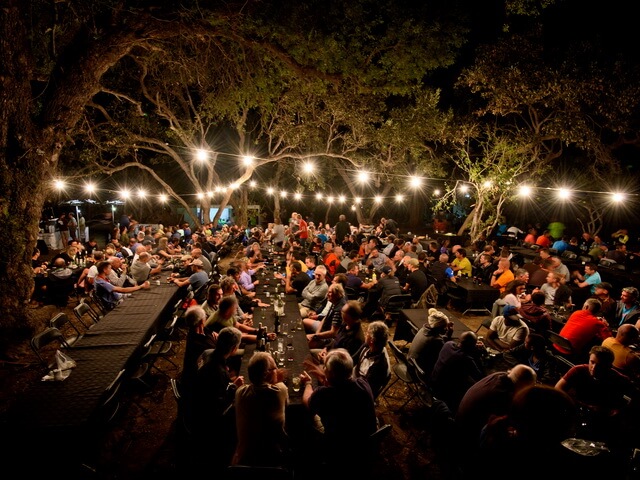 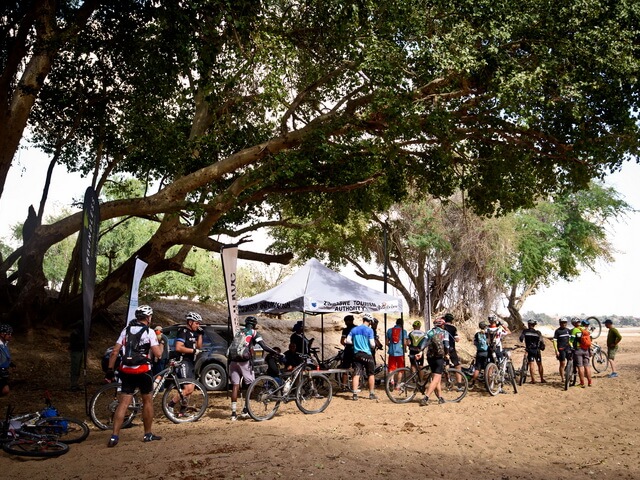 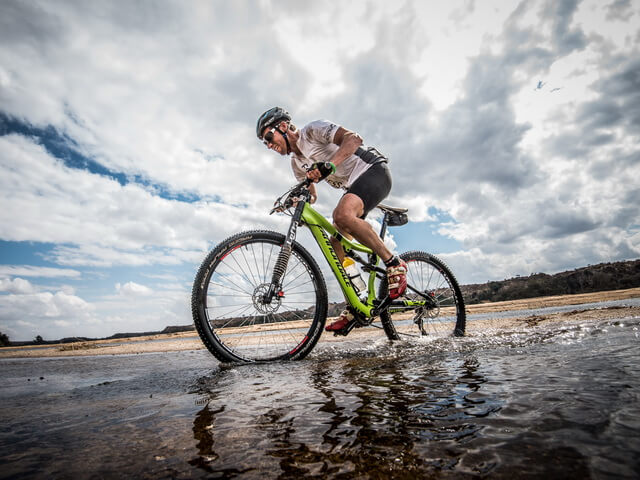 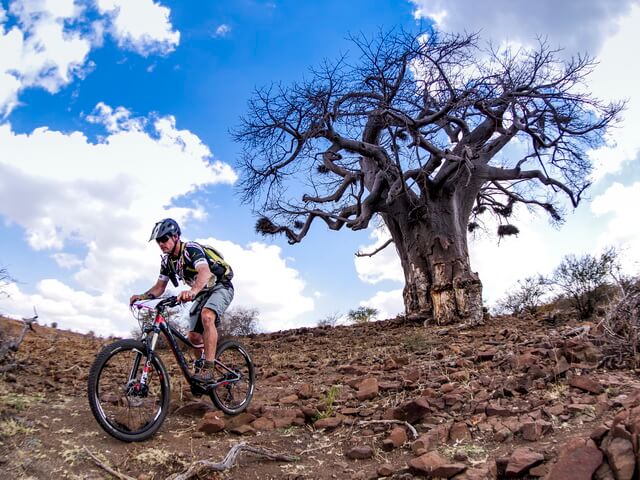 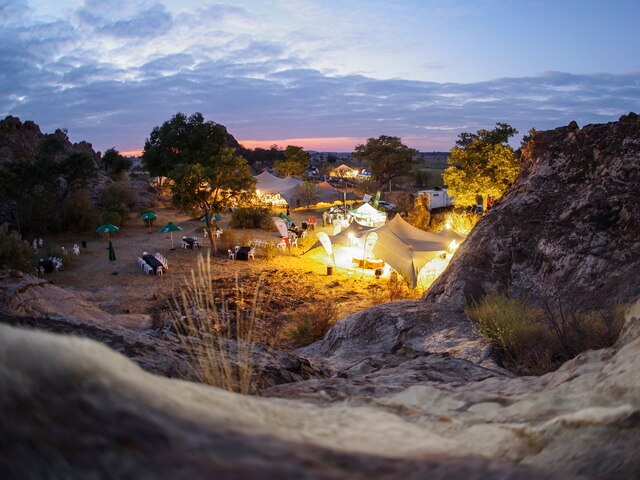 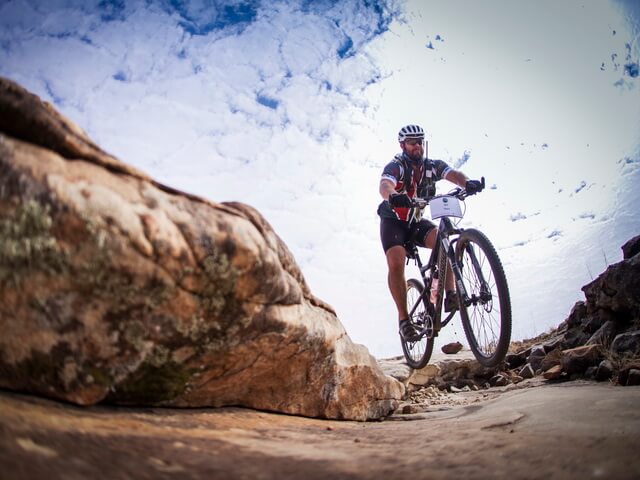 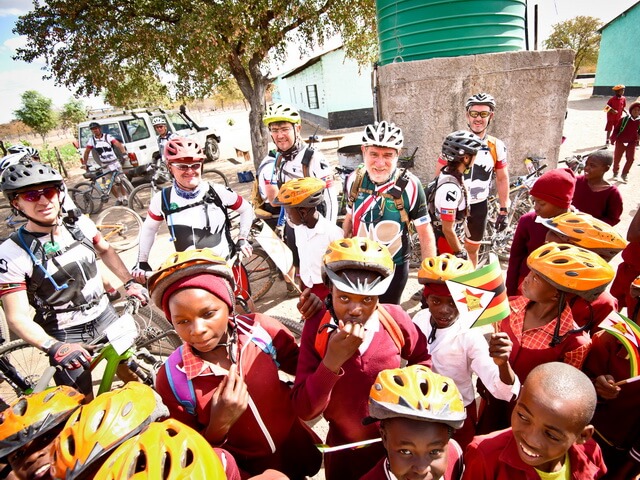 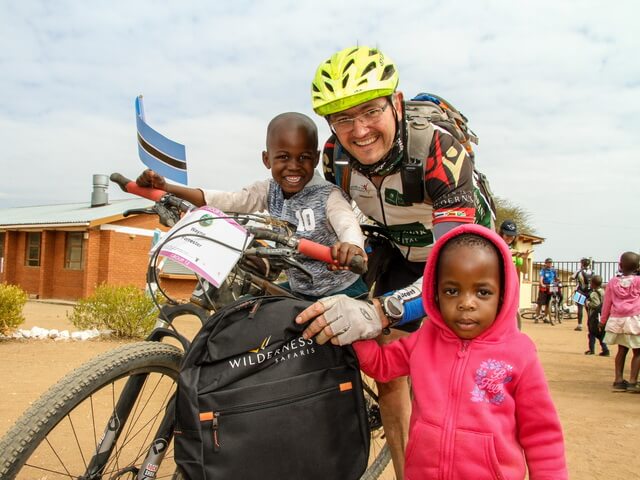 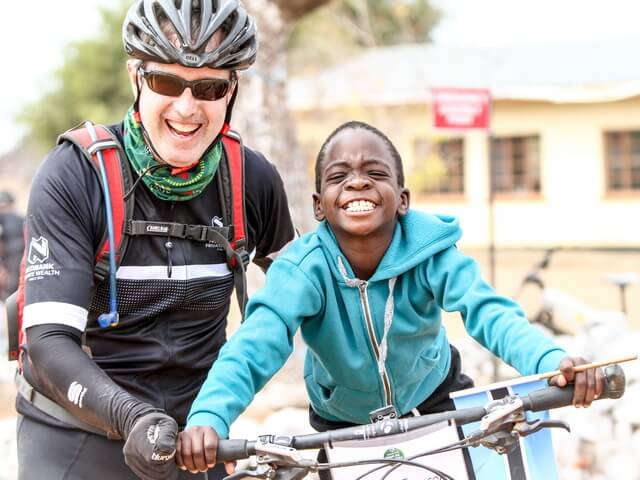 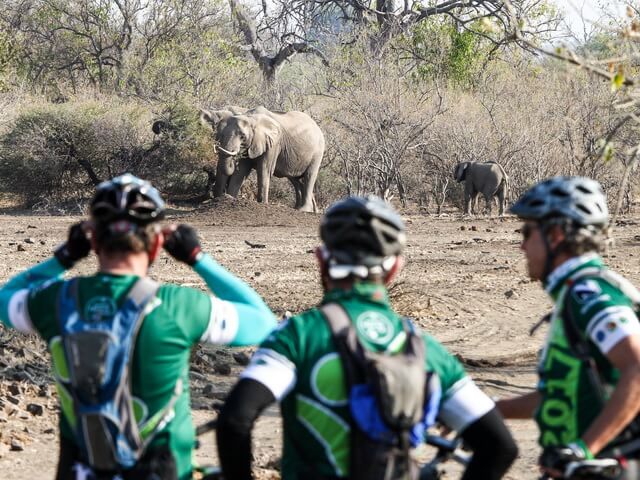