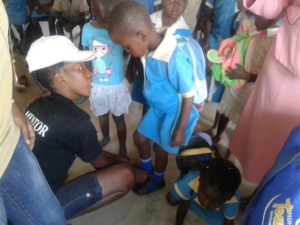 With Christmas just around the corner we are once again caught up in the exciting swirl of festivities, fun and overindulgence that is associated with the Christmas season. It can be easy to forget the real meaning of Christmas…. then we come across a story like this and we are reminded what this time is really all about!
Our story actually starts nine months before the 2016 Christmas season, with a Wilderness Safaris member of staff, Samantha Botes, a mother of two delightful little girls and a Senior Journey Specialist in the Cape Town office sitting outside her office waiting to begin a day’s work and thinking how she could make a difference.
As Samantha’s girls steadily grew she was in the habit of keeping the shoes they had outgrown in the hopes of being able to pass them on to children in need one day. She had looked at various NGO organizations but it wasn’t until she looked closer to home that she found exactly where the shoes were so badly needed. Reading about Children in the Wilderness in one of the Wilderness coffee table books, Sam noticed that in the pictures of children at schools near Victoria Falls and Hwange many of them were without shoes. Sam decided that these Zimbabwean CITW schools would be the perfect recipients for the shoes she had collected.
Expanding on this amazing idea, she contacted CITW Zimbabwe in Victoria Falls, who were delighted! CITW Zimbabwe assists with 10 rural schools in Zimbabwe where they did a survey and were amazed at the staggering number of children who walked barefoot, the 5 to 10km to school each day.
Sam wrote about her idea with a lovely appeal to Wilderness Safaris staff in Johannesburg and Cape Town, encouraging them to read her story during their coffee break and join her in her shoe collection. Her appeal was met with such enthusiasm that Sam said she decided to then reach out to her girls’ Kirstenhof Primary School, asking the parents and children to collect their children’s outgrown shoes for this newly established project.
The project took off and the shoes came flooding in. At her daughters’ suggestion, Sam put out a further appeal for new pairs of socks to accompany the shoes, which again was met with enthusiasm. As an added boost to the project ‘Crocs’ came on board and kindly donated over 200 pairs of small sized Crocs.

With over 500 pairs of shoes and plenty of brand new socks, the question was how to get them to Victoria Falls for distribution. ‘Pickford’s’ very kindly came to the party, transporting them from Cape Town to Johannesburg. Holler Trade kindly joined the parade and took the shoes on the final leg to CITW in Victoria Falls. This was no small feat and it took almost a year to come to fruition!

In the first week of December the CITW team distributed the shoes to those in need, what an absolutely wonderful and joyous occasion this was for both staff and children. The team watched in delight the faces and reactions of all the children – some feeling shoes on their feet for the first time, others squeezing their feet into shoes to make sure they fit and others helped littlies to put shoes on the right feet.

Our story comes as a warm reminder that if we all pull together, even the smallest idea or act of kindness, when shared amongst us all, can go a very long way to changing lives for the better. The CITW Zambezi team would like to thank Samantha, Wilderness Safaris staff, Crocs, Pickford’s and Holler Trade for assisting with this project and for their kind and generous donations. It has meant so much too so many.