Three years back Vumi Dlakavu (who works in our Johannesburg office) started a casual morning soccer practice in Vosloorus for youngsters aged seven through 15. The sessions became a regular event and the boys became quite disciplined about attending the sessions.

Last year Vumi decided to form a youngsters’ soccer team: “We started participating in friendly matches and many of the boys proved to be very good. However, some of the better players left us for other teams through the disappointment of not having an official uniform.”

After Vumi mentioned this to Dr. Sue Snyman (Group Community and Culture Manager and Project Director for CITW), CITW donated soccer kit that had been given to us by a PackforaPurpose.org guest. 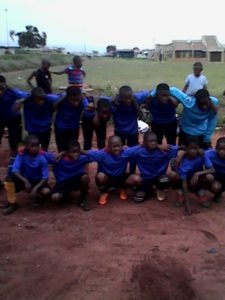