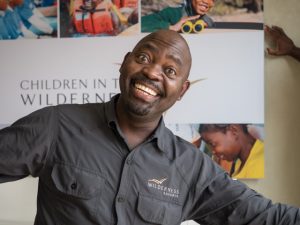 Lesego ‘Lesh’ Moiteela has worked for Wilderness Safaris Botswana since 2004, spending a lot of time in the Explorations team, and working in the Series business as Lodge and Operations Manager. He later joined Wilderness Safaris’ mainstream lodge business as an Operations Manager, until his latest promotion to Cultural Ambassador and Community Relationship Manager and CITW Botswana Programme Coordinator.

Lesh comes with a rich history of experience in hotel and restaurant management, including working in guest relations for one of the world’s top entertainment destinations, Walt Disney World in Florida. He has always had a passion for people and in his current capacity, represents Botswana camps and lodges with pride in HATAB (Hospitality and Tourism Association of Botswana), and works with BTO (Botswana Tourism Organisation) and various other government departments and NGOs.

Lesh was born in the small town of Serowe, Botswana, and comes from a family of five children. He left school at an early age to hit the big city and started working in the hotel industry, gaining much experience from the bottom up. He completed a course in Hotel and Restaurant Management and acquired a Diploma in Lodge Management. Lesh also successfully completed a Management Development Course (MDP) through the University of Stellenbosch Business School.

After joining Wilderness Safaris as a trainee manager in 2004, Lesh was soon promoted to a Camp Manager where he was also very involved in the construction of numerous camps. He was promoted to Field Manager, and then to Assistant Operations Manager of the Series business. Lesh then became the Operations Manager for the Linyanti Concession, heading up three camps (King’s Pool, DumaTau and Savuti). During this time, he also achieved a qualification as a Professional Guide with the Botswana Wildlife Training Institute.

Lesh was overseeing the operations for six lodges – Abu, Seba, DumaTau, Savuti, King’s Pool and Linyanti Tented Camp. He was responsible for all operations in the Abu Concession, playing an instrumental role in the Elephant Experience and welfare of the Abu Herd, whilst learning a great deal about the ambassadorial importance these great animals play in elephant conservation.

As an energetic and fun-loving person, Lesh has an excellent, warm and friendly way with people, which makes him the ideal candidate to drive his latest role of Cultural Ambassador and Community Relationship Manager for Wilderness Safaris Botswana forward. Lesh also heads up the Children in the Wilderness Team in Botswana as CITW Programme Coordinator. In addition to driving the company’s Media/PR relations within Botswana, Lesh works closely with various internal and external communities and stakeholders to ensure that all relationships are nurtured and grown, and remain closely aligned to Wilderness Safaris’ core 4Cs sustainability ethos of Commerce, Community, Culture and Conservation.