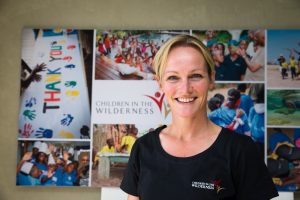 After successfully managing the opening and running of Wilderness Safaris’ Bisate in Rwanda, garnering numerous international awards and recognition for the lodge, Ingrid Baas was recently promoted to General Manager for Wilderness Safaris Rwanda.

In addition to managing all procurement, HR, training, service and guest experiences for Wilderness Safaris Rwanda, Ingrid will be focusing on growing the company’s community and Children in the Wilderness (CITW) projects within the region. This is something that is very close to her heart having spent many years working closely with CITW in Zambia.

Ingrid grew up in the Netherlands and studied at the Amsterdam University of the Arts where she obtained her first level teaching degree in 1999. Whilst studying and living in Amsterdam she met her current husband Rob. During this time, the travel bug bit and their love for experiencing new and interesting cultures and untouched nature began. These journeys brought them to stunning places in Asia, South America and Africa, and their desire to live abroad grew.

In 2006, after travelling through Zambia for a month and falling in love with the country, they decided to leave the comfort of their jobs and home in the Netherlands in search of adventure, nature and different cultures, and to follow their dream. Their hospitality career thus began in South Luangwa National Park which was followed by almost seven years with Wilderness Safaris in Kafue National Park; starting out as relief managers but soon promoted to camp management. From then on, they quickly developed into General Managers, Concession Managers and later on Area Manager and Service Manager.

From the onset, Ingrid was closely involved with Wilderness Safaris’ non-profit partner, Children in the Wilderness (CITW). After hosting the first CITW camp in Kafue in 2007, she became committed to the programme and was appointed the CITW Coordinator for Zambia. Together with Rob, she made the move to Namibia in 2014 for three years, joining Namib Sky Balloon Safaris in Sossusvlei where they worked closely with Wilderness Safaris’ Kulala Desert Lodge and Little Kulala Camp.

Ingrid is proud to have played such a pivotal role in the success of Bisate and is looking forward to ensuring that the company’s Rwanda operation grows from strength to strength, with the first new development being Magashi in Akagera National Park. Magashi will be open in May 2019 and Ingrid is looking forward to sharing this beautiful part of Rwanda with Wilderness Safaris guests.

“It is very exciting to have been a part of the Rwandan operation from the beginning and to have the opportunity to contribute to the success of Wilderness Safaris in Rwanda. It is an amazing country with beautiful people with a ‘can do attitude’, very diverse landscape and wildlife and lots of possibilities for growth and development”, she concluded.