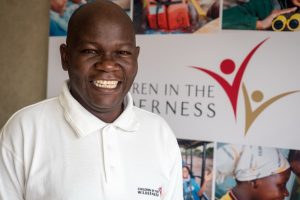 Symon Chibaka graduated with a Bachelor’s Degree in Community Development from Pentecostal Life University in Malawi. He also attained a Higher Diploma in Business Administration from the Malawi College of Accountancy.

Symon later studied Environmental Education through the Natural Resources College. He also worked with Save the Children (USA) in a youth development project for three years. Thereafter he worked with Dzimwe Community Radio Station, where he was involved with the production and controlling of Community Development and Environmental Conservation radio programmes.

In 2002 Symon joined Wilderness Safaris Malawi in the guiding department, and in 2003, participated in his first Children in the Wilderness Malawi programme while working at Mvuu Camp in Liwonde National Park.
In 2006 he became the CITW Camp Director while still working as a guide, until in 2010 he became CITW Malawi Programme Coordinator on a full-time basis.

Symon has participated in camps in both the USA and Ireland in order to learn how to develop and organise children’s camp programmes, and has spent time in Israel-Gaza to assist with the development of a programme similar to CITW (Eye to the Future – CARE International Jerusalem).
Symon has also assisted the Lilongwe Wildlife Trust with teachers’ training and the development of their wildlife clubs and community conservation programmes.