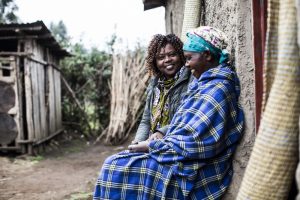 Aline Umutoni was one of the first employees of Wilderness Safaris Rwanda, starting her contract as the Bisate Lodge Community Guide on the 15th March 2017.

Aline’s in-depth knowledge of Rwanda’s Bisate area and Volcanoes National Park is seemingly endless, as she previously worked as a guide in Volcanoes National Park, taking tourists on gorilla trekking and nature walks in the park. Her positive energy, enthusiasm and motivation, and deep commitment to conservation and community empowerment, is inspirational. Her goal is to improve the lives of all community members living around Bisate.

In recognition of her admirable commitment, Aline has been employed as the CITW Community Coordinator from the 1st of September 2019. This means she will not only focus on the Bisate area, but also the communities around Magashi and Gishwati.