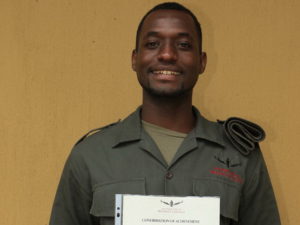 Name: Adolf Jaison Moomba
Gender: Male
Age: 25
Village: Mazabuka
Background: Adolf completed his primary school education at Kasanda Primary School, and completed his secondary education at Zimba High School in 2009. Adolf obtained a full certificate. Thereafter he studied at Victoria Falls University and obtained Bs in Business Administration in 2015. Adolf has been involved in the afforestation programmes organised by Green Pop, and later got involved in environmental programmes and attended Eco-Club lessons as an Eco-Mentor at Holy Cross School. He then worked for Livingstone Tourism Association as an Administrative Assistant before following his dreams and completing a Bridging Course in Environmental Education at Southern African Wildlife College in 2016. He is currently completing his practical with Wilderness Safaris at Tokaleya Lodge in Livingstone.
Proposed further tertiary studies: Having completed the bridging course at SAWC, Adolf developed a further interest
in conservation, and would like to pursue a career in Nature and Conservation. He would like to further his studies at SAWC in 2018 by doing a Higher Certificate in Nature Conservation Implementation and Leadership (NQF Level 5 and Level 6) for the Advanced Certificate-Trans Frontier Conservation Management.